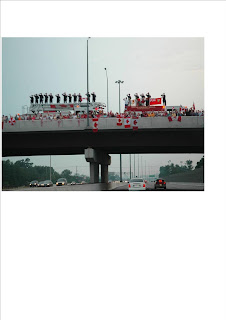 Here are two articles sent to me which I felt strongly about:


After Wellington not wanting to offend other cultures by putting up Xmas lights. After hearing that we are going to let a Muslim woman have her picture on her drivers license with her face covered. This prompted this editorial written by a New Zealand Citizen. Published in a newspaper.

IMMIGRANTS , NOT NEW ZEALANDERS, MUST ADAPT. TAKE IT OR LEAVE IT!

I am tired of this nation worrying about whether we are offending some individuals or their culture. I am not against immigration, nor do I hold a grudge against anyone who is seeking a better life by coming to New Zealand.

However, there are a few things that those who have recently come to our country and apparently some born here, need to understand.

This idea of New Zealand being a multicultural community has served only to dilute our sovereignty and our national identity.

As New Zealanders, we have our own culture, our own society, our own language and our own lifestyle. Our culture has been developed over two centuries of Struggles, Trials and victories by millions of men and women who have sought freedom, even died for it.

We Speak ENGLISH or MAORI , not Spanish, Lebanese, Arabic, Chinese, Japanese, Russian or any other language. Therefore if you wish to become part of New Zealand society, -- Learn the language! "In God we trust " is our national Motto.

This is not some Christian, right wing, political slogan. We adopted this motto because Christian men and women, on Christian principles, founded this nation, and this is clearly documented.

It is certainly appropriate to display it on the walls of our schools. If God offends you, then it is recommended that you consider another part of the world as your new home. Because God is part of our culture.

If the Southern Cross offends you, or you don't like "A FAIR GO", then you should seriously consider a move to another part of this planet.

We are happy with our culture and have no desire to change, and we really don't care how you did things where you came from. This is OUR COUNTRY, OUR LAND, AND OUR LIFESTYLE, and we will allow you every opportunity to enjoy all this. But once you are done complaining, whining, and or griping about Our Flag, Our Pledge, Our National Motto, or Our Way Of Life, then you are highly encouraged to take advantage of one Other great New Zealand freedom..

"THE RIGHT TO LEAVE"

Posted by Unknown at 8:17 am No comments:

An Attack on Labour and the EU

Recently our MP voted against having a referendum on the new EU Treaty (Constitution) despite Labour having promised at the last General Election to allow us to vote on whether the EU Constitution should be ratified.

His excuse for his decision to renege on his promise is breathtaking; firstly he tells us that the Lisbon Treaty is not a constitution, even though every rational person accepts that both documents provide for the same fundamental changes to our relationship with the EU; a similarity that has been camouflaged by the use of a new name.

Then our MP tries to further justify his actions by equating the Lisbon Treaty with the Single European Act signed by Margaret Thatcher and the Maastricht Treaty signed by John Major, pointing out that neither of those treaties led to a referendum.

Setting aside the obvious observation that perhaps those very important treaties should have been put to a referendum, the major difference is that neither Margaret Thatcher, nor John Major went into a General Election promising to have a referendum on those treaties.

Labour is now saying that to have a referendum on the EU Treaty (Constitution) “would be near to impossible”, on the spurious grounds that it is a complex document most of the contents of which are “not known in detail by most citizens”.

That situation is no different after the General Election that before it, so why did Labour promise to hold a referendum? Answer; they wanted to win the election, after which they hoped we would all forget their promise. Do they think we are fools?

Date: 15th March 2008
Release date: Immediate
Subject: Gordon promises to reveal all his expenses if he is elected.

Gordon Henderson has promised to reveal full details of any expenses that he claims if he is elected as a member of parliament after the next General Election.

Mr Henderson made the pledge when he addressed the Annual General Meeting of Sittingbourne and Sheppey Conservatives, which met in the Sheerness Conservative Club on Friday 14th March.

‘Recently I was talking to an MP who was astonished when I told him that if I am elected I will commute to Westminster every day. “You can’t do that,” he told me, “it is hard work commuting. You really must get a flat in town. There is an allowance for a second home so you might as well use it.”’

‘My response was simply this; getting a flat in town might well be a sensible thing for those MPs who live some distance from London, but I am only an hour’s train journey away. A large number of my future constituents, including my own daughter, commute to London every day; they cannot afford to own two houses and if the hard work of commuting is good enough for them, then it is good enough for me.’

‘Of course, we have seen a lot in the news recently about MPs expenses. Many MPs seem loathe publishing details of their expenses, or, providing receipts for all their expenses. Quite frankly I find that attitude quite scandalous. Having been in business most of my life I have absolutely no problem providing receipts for expenditure. In business if you don’t provide a receipt, you don’t get your money reimbursed. It’s as simple as that and so it should be.

‘Now there is talk of MPs being forced to reveal their expenses. Don’t hold your breath! MPs have a record of kicking such requests into the long grass! Which is why I make this promise to you; if I am elected at the next General Election, whatever the other MPs do, I will publish regularly all the expenses that I have claimed and will provide receipts for all the expenditure.

‘I will also make you another pledge; last year Labour MPs voted themselves an annual £10,000 “communication allowance”, which they use for glossy leaflets promoting themselves. This means that we tax payers are funding promotional literature that should properly be paid for by the MPs themselves. So, once again, if I am elected I promise you here and now that I will refuse to take that £10,000 communication allowance.

‘I know it is only a miniscule part of Government expenditure, but I hope my refusal will be a symbolic gesture. I hope it will demonstrate that my first priority will always be to the taxpayers of Sittingbourne & Sheppey, and not to my own bank balance.’
…ends…
Posted by Unknown at 7:19 pm No comments:

I Dare any Newspaper to print the following

Here is a woman who should run for Prime Minister!Written by a housewife in New Brunswick, Canada to her local newspaper. This is one ticked off lady.'

Are we fighting a war on terror or aren't we?

Was it or was it not startedby Islamic people who brought it to our shores on September 11, 2001 andhave continually threatened to do so since?

Were people from all over the world, not brutally murdered that day, indowntown Manhattan, across the Potomac from the nation's capitol and in afield in Pennsylvania?

Did nearly three thousand men, women and children die a horrible, burning orcrushing death that day, or didn't they?

And I'm supposed to care that a a few Taliban were claiming to be torturedby a justice system of the nation they come from and are fighting against ina brutal insurgency.I'll start caring when Osama bin Laden turns himself in and repents forincinerating all those innocent people on 9/11.

I'll care about the Koran when the fanatics in the Middle East start caringabout the Holy Bible, the mere belief of which is a crime punishable bybeheading in Afghanistan.

I'll care when these thugs tell the world they are sorry for hacking offNick Berg's head while Berg screamed through his gurgling slashed throat.

I'll care when the cowardly so-called 'insurgents' in Afghanistan come outand fight like men instead of disrespecting their own religion by hiding inmosques.

I'll care when the mindless zealots who blows themselves up in search ofnirvana care about the innocent children within range of their suicidebombs.

I'll care when the Canadian media stops pretending that their freedom ofspeech on stories is more important than the lives of the soldiers on theground or their families waiting a home to hear about them when somethinghappens.In the meantime, when I hear a story about a CANADIAN soldier roughing up anInsurgent terrorist to obtain information,

I don't care.When I see a wounded terrorist get shot in the head when he is told not tomove because he might be booby-trapped, you can take it to the bank:

I don't care.When I hear that a prisoner, who was issued a Koran and a prayer mat, andfed 'special' food that is paid for by my tax dollars, is complaining thathis holy book is being 'mishandled,' you can absolutely believe in yourheart of hearts:

If you agree with this viewpoint, pass this on to all your E-mail friendsSooner or later, it'll get to the people responsible for this ridiculous behaviour!If you don't agree, then by all means hit the delete button. Should youchoose the latter, then please don't complain when more atrocities committedby radical Muslims happen here in our great Country! And may I add:'Some people spend an entire lifetime wondering if they made a difference inthe world. But, the Soldiers don't have that problem.'I have another quote that I would like to add AND.......I hope you forwardall this.

One last thought for the day:

Only five defining forces have ever offered to die for you:

andOne died for your soul, the other 4 for your freedom.
Posted by Unknown at 2:11 pm No comments: