Easter and all that 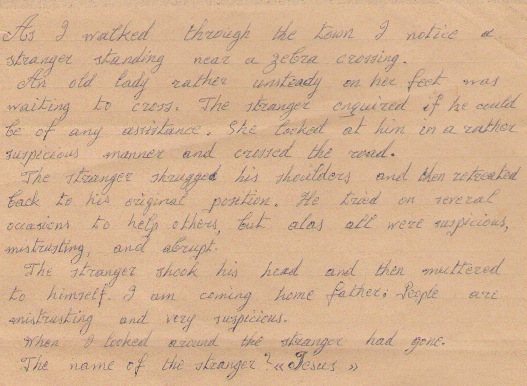 I found the above in one of my drawers seems very apt for Easter can not remember who gave it to me.

In the news the last Archbishop of Canterbury has a go at Cameron and his government he says "
n an article for the Daily Mail, Lord Carey squarely accuses ministers of ‘aiding and abetting’ discrimination against Christians.
He says he believes there is an ‘aggressive secularist and relativist approach’ behind the Government plans to legalise gay marriage and says the Prime Minister has ‘done more than any other recent political leader’ to ‘feed’ Christian anxieties" Nearly 2/3 of Christians feel they are victimised because of their faith. I was brought up a Roman Catholic and although I do not practise my faith I do believe in god and of course I question many things about my faith I also question the people who say they are Christians and then do despicable things but the fundamental teachings of Jesus are right and proper.
Until recent years I have felt the need to broadcast what I believe in but things have changed so much since Tony Blair was electedNow is the time to say and let people know I believe before the Country falls like Sodom and Gomorra

Here is the full story

Posted by Unknown at 1:16 pm No comments:

I have many contacts in Russia because of my sport and have noticed how the Rich and powerful can do anything they want with very little regard to the law. What has always amazes me is that a few Decades ago they were all Communist with no private ownership now you have all these Russian Billionaires so how did they get their money?
Posted by Unknown at 8:41 am No comments:

What ever next banning horse and dog racing, maybe banning horse riding as it is demeaning to sit on a horse and what about pets that must be cruel they should be allowed to roam where they like?

Now here is a surprise for you

120,000 Romanians and Bulgarians have already moved to Britain: Census shows in some parts of the country one in ten are Eastern European
•    Fears of major influx when travel restrictions lifted at the end of the year
•    In Boston, Lincolnshire, 10.7 per cent of population are Eastern European
•    PM announced plans to make access to social benefits harder for migrants

Why is it that back in the 1950’s and early 1960’s we had very little discipline problems with kids, most children were born in marriage, drugs and alcohol was something the Film stars done. Could it be we still had a married Mum and Dad with children, with the Mum putting caring for the children as the most important thing in her life, could it be that we had old-fashioned education system,  could it be we trusted and respected people in authority, could it be that being Gay meant you were happy, could it be contraception was NO,  just a thought

Below is an article by Michael Gove, he asked some Secondary school kids “Who is Churchill” they replied “ The dog in the advert” what a great education system we have

I refuse to surrender to the Marxist teachers hell-bent on destroying our schools: Education Secretary berates 'the new enemies of promise' for opposing his plans

I was watching Foyle’s War on Sunday, which I thoroughly enjoyed but one thing that has not changed since then is the way we treat our soldiers when they have finished their services.  In this episode an Ex Policeman returns from being a Prisoner of War with the Japanese only to be told he is no longer wanted as a Policeman, he is told that the Police are fed up with having to look after ex serviceman and the recruitment officer said those who remained at home had done just as much as those who served in the Forces? The same is happening to our soldiers today from being refused houses and jobs, doesn’t say a lot about our country does it.

Val and myself were invited to the Taste of Portugal (Tops’) for a private meal with all their Portuguese friends and it was a Peasant type food consisting of chicken, beans, potatoes, cabbage plus some paella. It was delicious washed down with some wine a great dinner and the friendliness of these Portuguese’s people was great. Some still have houses in Portugal, I hope to twist their arm and rent one for a holiday. If you get the chance pop in and have a meal oh we finished the evening with Karaoke most of which was Portuguese.

I have enjoyed politics all my life served as a Councillor and have been deputy Chairman of the Local Conservative Party but for backstabbing and bitchiness you cannot beat International Sports Politics. Recently I have been having disagreement with an International Sambo organisation I will not bore you with the details but this group which is dominated by the Eastern Block have no idea about democracy and as an Englishman I firmly believe in a constitution. Sometimes we are ridiculed about this a Russian once said to me “when you English have more the 6 people together you form a club and a constitution”, he then laughed, I retaliated and said “you lot get 6 people together and form a dictatorship”. Serving on some of these International bodies is not for the faint-hearted bribery intimidation, corruption can become the norm
Posted by Unknown at 9:22 am No comments:

New immigrants told: You must pay to see a GP - and will move to the back of the queue for council homes

What a brilliant idea but how long will it work before some left wing liberal starts bleating about Human Rights or one of those rich greedy Human Rights Lawyers jump on the band wagon. The best way to prevent problem like this is not to let them into the country in the first place

Is feeding your children a raw vegan diet nuts? This family says is helped them beat everything from asthma to acne

Can you believe what some nutty parents will put their kids through because of some fad. What a boring life and the smell in the house from gastric wind must be appalling

'I don't even know what wife I was with in 1978': Jim Davidson moans to half-empty audience after sex allegation re-arrest

I quite like Jim Davidson although I think the continual swearing in unnecessary but don’t you think the Police, establishment are going over the top with all their enquiries because of Jimmy Saville. The Police and the establishment made a big blunder and cover up with Saville, now they think they can redeem themselves by arresting every TV, Radio Celeb. It seems everyone accuser is jumping on the band wagon to make money, problem is those who are genuine will eventually lose out when the cheats get found out

Once again as I keep saying one rule for Homosexuals one for Heterosexuals, mind you both lots are stupid to put ad on the bus. How long before Vegans are treated as a minority group who need extra rights. Can you imagine going to a restaurant where they have to serve vegan food by law, the smell and the sounds would be disgusting

I was watching a programme on BBC where the Police set up a Camera in a house and car, which proved very successful. Yet all those who were court (pun) none them received a Prison sentence? And now there is a group who want women criminals to be sentenced more leniently. Even in the criminal system the White Heterosexual Male is discriminated against. I for one am fed up with the Human Rights Charter or should we call it the Criminals Charter. Build more prisons or bring in Prison ships and stop making excuses for people who break the law

SATURDAY ESSAY: Why we on the Left made an epic mistake on immigration

On benefits in Birmingham, the African war criminal we can't kick out: Rant of 'murderer' staying on human rights grounds is being funded by tax payer

'It's a free county... sell your shares': Starbucks CEO blasts shareholder who told him that company's support for gay marriage was hitting profits

Why would any company get involved in such an issue as Gay Marriage? Surely their job is selling coffee I personally do not use Starbucks the Taste of Portugal does excellent coffee
Posted by Unknown at 9:31 am No comments: