Here are a couple of articles you may want to read they both refer to the Latest craze being Transgender and the ridiculous idea you can be Gender Neutral. Gender Neutral is where you tell people you are neither Male or Female? What a ridiculous idea if you have a Penis you are Male if you have a Vagina you are Female in my opinion. Yet has anyone thought through the idea of Gender Neutral becoming a legal term? 1) What toilet would they use, what changing room would they use? More importantly when it comes to sports would we have to have a gender-neutral category, i.e. Football, Judo, Sambo etc.? The ultimate answer would be to have Male and Female Sports teams etc. i.e No gender and what section of society  would be most affected by this?

Since 2000, a total of 853 trans women and 12 trans men had state-funded surgery to change sex according to Daily Telegraph

ONS 2015, 1.7% of the UK population identified themselves as lesbian, gay or bisexual

Gender Neutral there are no accurate figures those who are promoting this weird notion say it is 0.4% a figure which is suspect

So why do we spend in large amount of money and time on such a small percentage of the population?

What has happen in the last 50 years is the food or something that has produced these weirdo’s? It seem the Liberal/Left have drawn enough out of Homosexual and Lesbians now it is the turn of the weirdo Gender Neutral to take the stage

Molly then told me two of her friends were in the process of becoming male and had started dating girls at the school. Now when I was at the school the girls also, er, ‘dated’ and would flit across Brook Green in their nighties after dark to ‘see’ each other, but this felt different. The pupils in this case were not lesbian, as they were trans, but it was still not a heterosexual relationship. Molly explained it all as patiently as she could and I tried to get my head round it – at St Paul’s Girls’ School the girls are not called girls any longer and have non-homosexual relationships with the same sex – but soon realised I was lost.

I suspect the whole ‘Trans’ issue has been cooked up so that nobody can ever say anything about it (including here) without being somehow in the wrong, and open to attack by the Thought Police. Now that there’s no more mileage in homosexuality, it’s the best way of making conservatives look like bigots.
But those of you who have clung to the Tory Party through thick and thin must have wondered a bit last week when it endorsed the idea that anyone can be whatever sex, sorry ‘gender’, that they want to be.
Here’s the simple explanation. The Tory Party itself has changed sex, from Right to Left. It is a ‘Trans’ party. I’m puzzled that it has yet to change its name. How about ‘Doris’? And it now feels free to come out. Yet still you vote for it.

Yet my understanding was that he would not allow those who are in the Military to be able change sex for the reason of Cost and moral, he also will not allow people going through the Change to enter the Military for the same reason. The Military are there to defend your country they are not there for Social experiments

Now my understanding if they have gone through the complete gender change they are allowed to enter because they have reassigned their sex . Now I have this strange notion that if some one has a Penis they are Male with a Vagina is a woman. So do these people who the change remain always as Transgender or are they a Man or Women? If they are the latter there is no problem them entering the Military.

If the UK armed forces allowed gender change for serving personal, what of the cost not just the operation but the subject would not be able to do their job. Also where does it stop Service personnel allowed Breast Enlargement, Penis enlargement etc, etc. The last thing that our reduced Armed Forces want is more PC as for the LGBT champion Rear Admiral Burton instead of spending time on Social issues he should be doing his job of looking after all his Sailors.

I have to admit I was shocked when I read that our Navy allows Gender change and will pay for it implication, the Navy and the rest of the armed forces complain about funding BUT the can find money for this Gender change surely the money would be better used to defend our country

Some Months ago I heard a Rumour that the Church in Central Avenue was being sold and was going to be turned into a Mosque, so I contacted some of the powers that be whether this was true and thankfully it was just a bit of Gossip. Yet one reply said No this was unfounded Rumour BUT why should there not be a Mosque in the Town?
Now I have travelled the World through my sports of Judo and Sambo, I have met people of different Colour, different Culture and different Religion and have never met a Militant Muslim, I do not have any friends of who are Muslim but I use a hairdresser and Indian Restaurants where there are Muslims, the service is very good and the people very friendly.
So why am I against further Mosques being built in the UK?
1)    No one can deny that Islam is not the Most Peaceful Religion in the World as proscribed by the UN. It followers are reaping hell throughout the World and wanting World Domination and the implication of Sharia law.
2)    Every area that has a Mosque built encourages more Muslim to the area, you only have to see Social Media to see what impact that has
3)    Many of these Mosques built throughout Europe are funded by Saudi Arabia, which promotes For more than two centuries, Wahhabism which has been Saudi Arabia's dominant faith. It is an austere form of Islam that insists on a literal interpretation of the Koran. Strict Wahhabis believe that all those who don't practice their form of Islam are heathens and enemies.
4)    So in General a large proportion of Muslims do not want to integrate with the local population instead preferring to create Ghettos
So no I do not want a Mosque in Sittingbourne, I expect if this article gets printed or allowed on Social Media the Liberal left will call me all sorts of names BUT the Establishment must realise the problems Islam is causing in Democratic Countries. I recognise a large proportions of Muslims may want to integrate and there are a few Islamic Clerics in the UK and Australia are trying to change Islam for the better. Yet the beliefs of Islam are a complete opposite to our Christian/Secular society and laws. Islam believe in the subjugation of women, death to Gay people, death to women who commit adultery and some cases death to women who have been raped, honour killings, Child Brides their prophet took a bride at 6 years of age, wife beating ete etc. Is that what we want in this country?
Now I would welcome Muslims if they accepted our Laws, and integrated into our society other religions like Sikhs, Jews, Hindus, Buddhist etc have done so and they still worship in their own way. They still have their own culture, which in some ways have enhanced the UK but they have not tried to overthrow our laws and cultural heritage .

Do you remember IRA Murders? 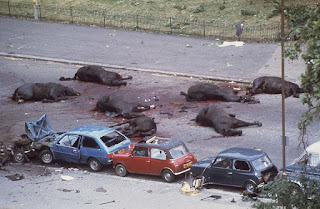 Posted by IBFBCSA at 4:23 pm No comments: