IS CLEGG IS A LIAR? 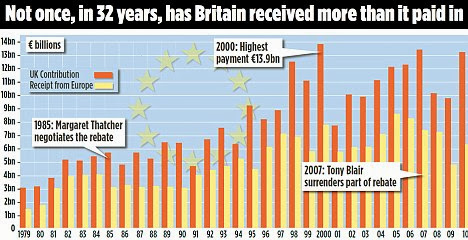 Tories will ruin the recovery by flirting with EU exit, says Clegg: Deputy PM says party will put politics ahead of what is best for the country
•    Liberal Democrat leader's New Year's message contains the warning
•    He said Ukip and the Tories would 'put narrow political interests ahead of the national economic interest'
•    The ramped-up rhetoric may anger his Tory Coalition partners

Surely the time has come for a totally independent body to be formed to take over the Honours’ System. I think it should go back to being for individuals who have served the people of this country not just for celebs, friends of political parties or sports people who win medals. The present system has devalued the honours system totally

The following is a comment from the article “How can Katherine "junkie" Jenkins be honoured at just 33yrs old?”

The 'cronies' honours list: Controversy over knighthood for PR man who holidayed with Cameron and awards to Tory and LibDem donors
•    PR chief Alan Parker, who holidayed with the PM, was honoured
•    At least two Tory donors have been honoured and four Lib Dem donors
•    Karren Brady handed a CBE after appearing at the Tory conference
•    Mr Cameron has been accused of running a Government of cronies

THIS IS A SURPRISE? NO

Sorry but migrants will STILL abuse the NHS: Department of Health research shows only 16% of charges are ever recovered

Will the Coalition Government listen NO

I have made it quite clear come the next election I will not vote for the Conservative Government I will vote for Gordon Henderson a Conservative MP because I consider him a true Conservative who is there to represent his constituents. It is about time Top Toff Cameron also listened to the people

This women is bang on, young women especially want to emulate men by drinking pints, getting wasted, swearing giving sex on demand hey may dress feminine but there is very little feminine about them, Then there is so called career women who think to have a child is just added extra alongside her posh car. On a recent Radio 4 broadcast a so-called career single mother explained her day wake at 5am feed the dog, 6am wake her daughter up to ready for school, 6.30pm take her daughter a friend, 7.30am child taken to child minder who takes her to school. Mother returns at 9pm. If that been a single mother form a working class background her behaviou wouild be considered Child neglect,

'There's no room for anything manly now': Feminist writer Camille Paglia speaks out AGAINST the loss of masculine virtues and its negative impact on society
•    The self-described 'dissident feminist' believes society is neutering boys of their maleness at a young age
•    She also believes the lack of people with military experience in important positions is a recipe for disaster
•    An avid listener of sports radio, she believes these 'are the men that would save the nation'
•    'Our culture doesn't allow women to know how to be womanly,' she said
•    Paglia also recently spoke out in favor of Duck Dynasty star Phil Robertson and defended his right to free speech

Self-described ‘dissident feminist’ Paglia, 66, believes that attempts to deny the biological distinctions between men and women is to blame for the much that is wrong with modern society.
'What you're seeing is how a civilization commits suicide’ she told the Wall Street Journal.
Paglia, a professor at the University of the Arts in Philadelphia, is well known for her critical views on many aspects of modern culture, including feminism and liberalism.
She recently spoke out in support of Duck Dynasty star Phil Robertson, supporting his right to express homophobic views.
‘In a democratic country, people have the right to be homophobic as well as they have the right to support homosexuality – as I one hundred percent do.
'If people are basing their views against gays on the Bible, again, they have a right of religious freedom there.' she told Laura Ingraham’s radio show last week.

Paglia, who is promoting her latest book, Glittering Images: A Journey Through Art From Egypt To Star Wars, told the WSJ that the diminished status of military service in people in important positions is a big mistake.

In a previous Blog I moaned about Food Banks and how you are better of on the Dole Duncan Smith was doing a good job, here are couple of quotes I took of the Internet

My husband, who is 41 is a junior doctor – and currently on what looks like and should be a really decent salary – £42,000 a year. His take home pay after his student loan is £28,000 a year. We have three young children 6,4 and 2. If we were on benefit, with him claiming job seekers allowance and tax credit, we would receive £25,362.
We worked out last night, the cost of him working is £5000 a year – by the time he has paid his insurance as a doctor (around £500 a year) and fuel to get to work – we live in a rural area and the costs of running a second car.
So, unbelievably, even though he is a higher rate tax payer, we would be £2000 a year better off on benefit – and that’s before free school meals (worth £880 for two children), potential social rates on fuel, etc etc.
He currently works 60-70 hours a week – if he didn’t work, he could help with the children, do any house maintenance – and, financially our lives would be easier. And next year, we will lose our child benefit too, worth £2256.
We are not managing to live on his salary and have only just realised that financially we should be behaving as if we were living on benefit as that is our…


The RSPCA is a left wing organisation with its uniforms it seems very much like a Paramilitary one. I used to do Judo displays for the RSPCA this stopped when they donated £1 million to the Labour Party to get Tony Blair elected and look at the damage he done to the Country. The fox is a merciless killing machine anyone who has worked in the country knows that and the best way to kill them is to find their set and Gas the whole lot, at least Hunting give the fox a chance and when they are caught death is instantaneous. Yet it is far from efficient with the majority escaping but the main reason for the Hunting Ban is a social Left Wing organisation’s like the RSPCA do not like the people who hunt as the consider them the Upper Class so therefore must be despised. You have to face facts you either leave the fox alone totally or you accept the fact they cause damage to the Countryside and Urban areas and need to be culled. I have yet to hear the RSPCA and their allies complain about the killing of rats by terrier dogs i.e. Jack Russell deliberately bred by Rev John Russell to be efficient Rat killing machines but then again they are ugly horrible looking creatures. One thing that shocked me was the RSPCA Poll that said 80% of the whole country was against Fox Hunting until I found out the Poll asked just 2000 people considering there is 63 million people in the UK it is far from accurate. The RSPCA is one of Britain’s most complained about Charities, it is also one of the richest charities in the UK, its membership in the last 10 years has fallen by nearly 50% according to reports. In 2003 RSPCA membership was 39,000 2013 it is 20,000 Can you wonder why?

Once again a small minority like the Pink Mafia have anonymous amount of power and influence over the 63 million who live in this country, I tried to get the numbers of who belong to Stonewall but could not find it but I did find out that their staff costs for 2010 was £1657,265 not bad for a charity?  I wonder how many other Focus groups who have a lot of influence but very little support?

Here is an interesting Blog you may want to read http://rspcainjustice.blogspot.co.uk/2010/02/public-opinion-of-rspca.html

% of population who are gay, lesbian or bisexual

It is incredibly important that this question be added to the census. Since the beginning of the gay rights movement, one of the most effective ways for gay and lesbian people to become accepted to become less invisible. Definitive proof that a reasonable percentage of the population is gay or lesbian can only aid in making people from all backgrounds and beliefs realise that they perhaps, know a gay or lesbian individual.
Pete, 27 December 2009
FACT 2010 Census revealed that Gay people represent just 1.5%

% of population gay, lesbian or bisexual?

Until the sexuality question is added to the census, we can't even begin to guess what the % of the population is LGB. Even when it is added, it will depend on who fills in the census form, whether family members are out to each other, and whether they are even out to themselves. Some might be scared of what the information will be used for too. It is still very important that it is added, so that we are made more visible.
Ric, 20 October 2009
The government done as they requested and in the 2010 Census revealed that Gay people represent just 1.5% not 5% to 7% as used by government and stonewall which was trying to validate giving more rights to this section of the community above that of the rest of us
Stonewall has said there were 3.7 million Gay people in the UK well another lie 1.5% is 945,000 still a large number which should not persecuted but should they be given extra rights NO. Here is what 63 million look likes in numbers 6,300,000 that is 5,355,000 who are normal sexual behaviour

Read more: http://www.dailymail.co.uk/news/article-2530316/RSPCA-sinister-nasty-organisation-no-longer-interested-animal-welfare-claims-countryside-chief.html#ixzz2or1NH8rl
Posted by Unknown at 12:10 pm No comments: