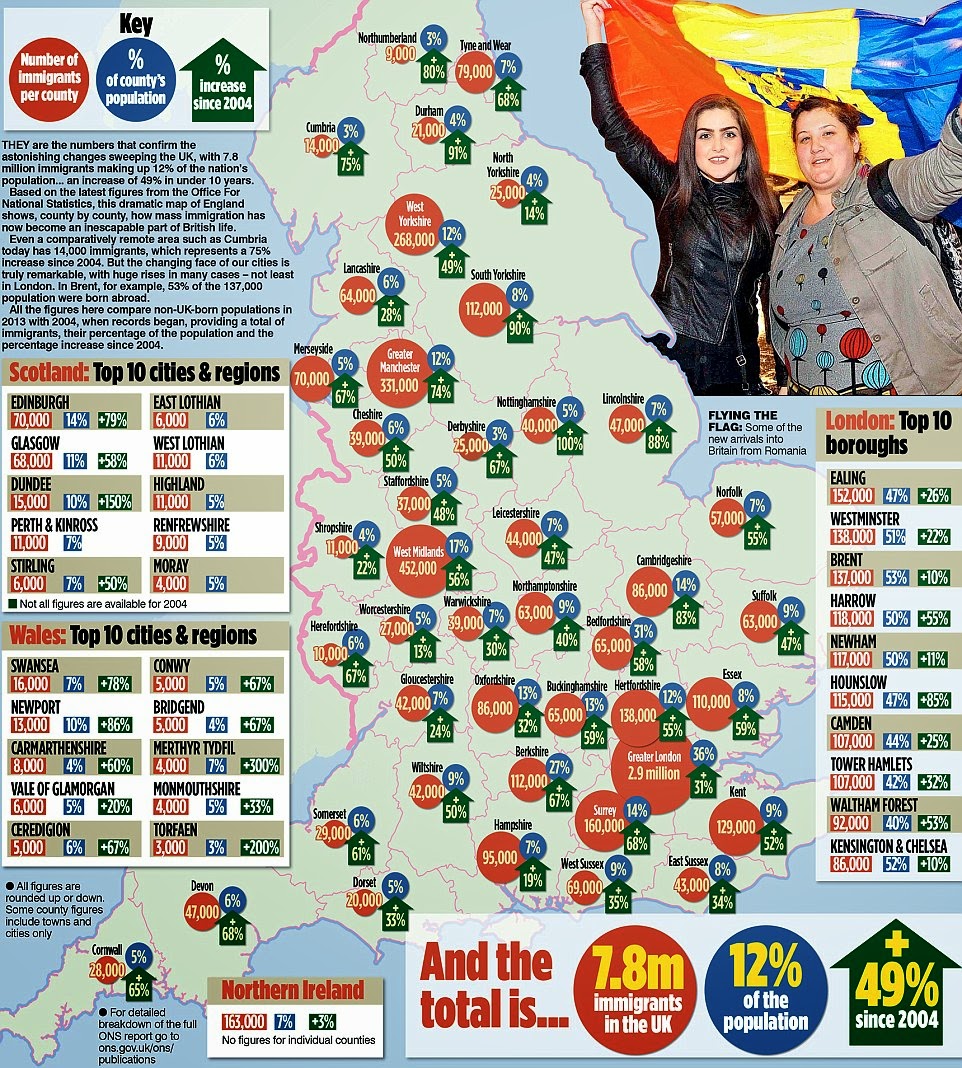 Not Romanian? No problem, here's an EU passport: Agencies with links to Russian mafia offer back-door route to millions

Is THIS why you wait so long to see your GP? Half a million immigrants are signing up at doctors surgeries every year

Astonishing new figures show immigration numbers up nearly 50% in just 10 years... as it emerges one MILLION more Poles want to come to UK

How can any Brit think staying in the EU is good?

Please note all these countries are Ex Communists who were our enemy for 1/2 century. The people who lived here thought their system was the Ultimate yet another Left Wing Myth 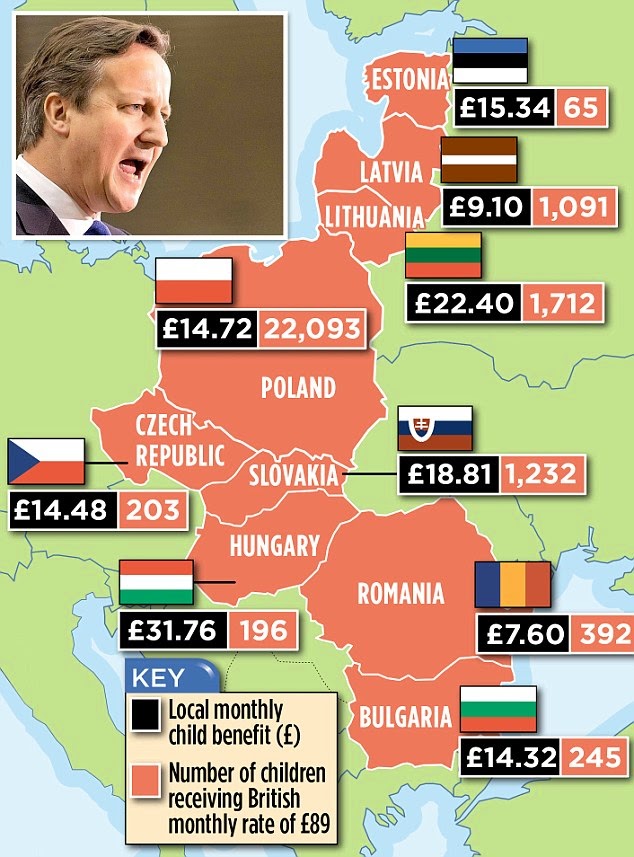 
Move are afoot to include readings from the Koran WHY? depending on which Poll you look at the Muslim Population is between 2%and 4% so why are falling over backwards
to appease them. What about Sikhs, Jews, Hindus and Catholics do we forget about them?

Posted by Unknown at 8:53 am No comments: 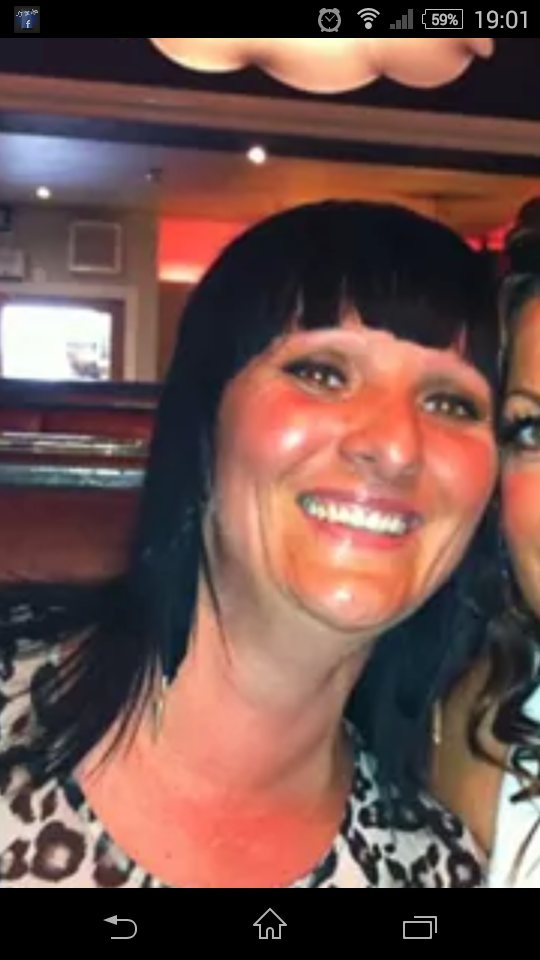 One of my ex Students Lucy Avis is very ill and is in Hospital and the prognoses is not very good. She is 39 years of age and has two young boys. Although I say she was a student a very good Junior Judoka she became much more then that she was a close friend to my daughter Susan and when  they were in their teens she would be round my house most weekend. I was never Martin to her she called me Martian. She was a beautiful Young Women full of fun and vigor and my memories of her are only positive ones. I believe in God and I believe miracles can happen so I hope you will all pray with me and hope for a miracle for a Young Mother who Val and me loved a great deal 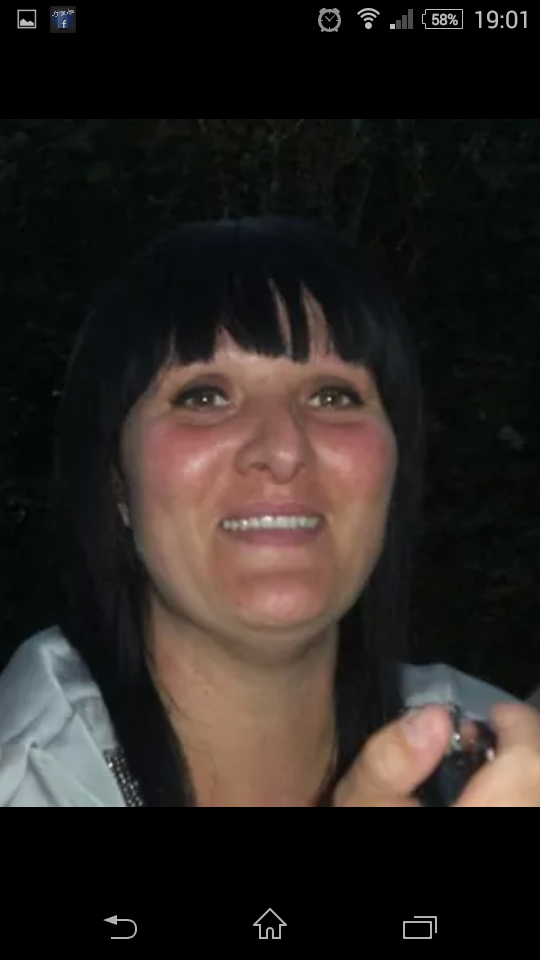 Posted by Unknown at 8:51 pm No comments:

Wonder if he has a job doing his collar up? 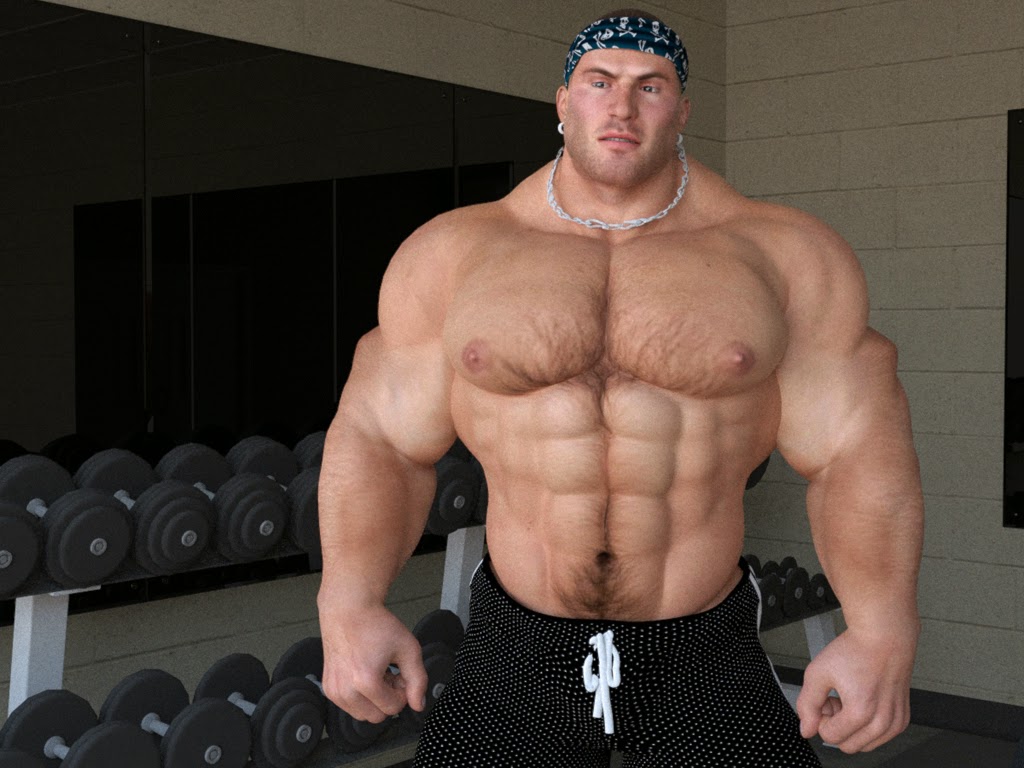 Posted by Unknown at 2:45 pm No comments:

IS IT HERE ALREADY

Conundrum
Free people are not equal.Equal people are not  free.
Continued:
"A gun is like a parachute. If you need one, and don't have one, you'll probably never need one again."
The definition of the word Conundrum is: something that is puzzling or confusing.
Here are six Conundrums of socialism in the United States of America:
1. America is capitalist and greedy - yet half of the population is subsidized.
2. Half of the population is subsidized - yet they think they are victims.
3. They think they are victims - yet their representatives run the government.
4. Their representatives run the government - yet the poor keep getting poorer.
5. The poor keep getting poorer - yet they have things that people in other countries only dream about.
6. They have things that people in other countries only dream about - yet they want America to be more like those other countries.
Think about it! And that, my friends, pretty much sums up the USA in the 21st Century.
Makes you wonder who is doing the math.
These three, short sentences tell you a lot about the direction of our current government and cultural environment:
1. We are advised to NOT judge ALL Muslims by the actions of a few lunatics, but we are encouraged to judge ALL gun owners by the actions of a few lunatics.
Funny how that works. And here's another one worth considering...
2. Seems we constantly hear about how Social Security is going to run out of money.  But we never hear about welfare or food stamps running out of money?  What's interesting is the first group "worked for" their money, but the second didn't.
Think about it.....and Last but not least,
3. Why are we cutting benefits for our veterans, no pay raises for our military and cutting our army to a level lower than before WWII, but we are not stopping the payments or benefits to illegal aliens.
Am I the only one missing something?

Posted by Unknown at 9:19 am No comments:

The Sainsbury Advert this year brought a tear to my eye. My German Grandfather won the Iron Cross for Gallantry and it was said that he took part in this Football match not sure whether that was true but would like to think it was. Every Christmas my mother would play Silent Night and cry her eyes out so every time I hear the Carol I get a lump in the throat

Posted by Unknown at 2:49 pm No comments:

Tax credits serve as a subsidy for employers

Tax credits serve as a subsidy for employers that simply encourages them to drive down wages. Unscrupulous employers are tempted to push wages down to the national minimum. And, of course, the subsidy is paid for by higher taxes imposed on hard-working families who manage to earn enough to support themselves.
Perverse
We saw the effect of tax credits and the way they push down wages only this week, when the Daily Mail revealed the UK’s biggest sandwich maker, the Greencore Group, wants to recruit hundreds of workers from Eastern Europe for its new factory in Northampton because it can’t find Britons to do the job.
But this is only the most recent example of the perverse effects of the wage subsidies.
For example, tax credits can also be claimed by people who say they are self-employed.
Many migrants have discovered that they can sell a few things on eBay, or collect a bit of scrap, or spend a little time selling door to door, or a charity magazine on the streets, and top up a meagre income with tax credits that make them better paid than many people who get up at 6am to put in a full day’s work.
By saying they are self-employed, these migrants get round the normal requirement that employees must work at least 16 hours a week to claim tax credits because it is impossible to check how many hours they do actually work.
There is also an impact on the wider economy and on our ability to reduce our crippling national debt.
The growth of low-paid jobs subsidised by other hard-pressed taxpayers partly explains why the tax revenue received by the Treasury has been falling, unravelling George Osborne’s plans to reduce the annual deficit.
We should surely be aiming to be a high-wage economy based on high productivity, not an economy propped up by low-paid jobs reliant on the mass migration of unskilled labour from poor countries.

Posted by Unknown at 2:28 pm No comments: 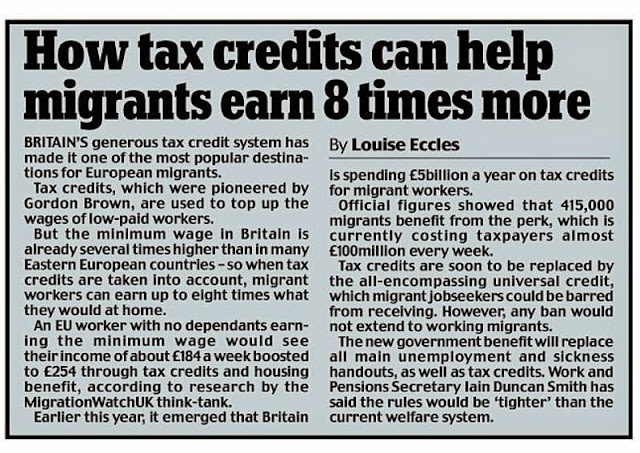 They will come here and have their money topped up with Tax Credits paid for by the British Tax payer because they get tax credits they will get to pay little or no Tax. They will benefit from working in the UK so will their company but the British Economy will gain nothing in fact they will be burden on the Taxpayer.
On Radio 4 this morning the boss of the Sandwich Company said Brits are to lazy they would not be prepared to stand for 12 hours a day 6 days a week. So basically they are expecting a workers to do a 72 hour week on minimum wage no overtime subsidised by UK Government where are the Unions when they are needed

Ignore these selfish bosses
I’ve never been able to take the CBI seriously. When I was a young industrial correspondent, they monstered Mrs Thatcher’s economic reforms, which — like Bob Hoskins in the Long Good Friday — put money in all their pockets, even when they was out of order.
And they were all for joining the euro.
Their only interest is not what’s best for Britain, but what’s best for them in the short term.
They stubbornly support mass immigration because cheap foreign labour cuts their overheads. The impact on wider society doesn’t worry them in the slightest.
I can remember a CBI conference in Glasgow 30-odd years ago, during which the then boss of the Dunlop rubber company danced on stage wearing a kilt and banged the drum for British business.
A few days later he sold the company to the Japanese.

Do these Muslims Women not realise they are treated as second class Citizens in this Feudal religion and people like Rowan Williams, Nick Clegg and supporters of this Religion steeped in the Middle Ages only perpetuate this. Another point would someone wearing a Balaclava and Sun Glasses be allowed to teach?

Rowan Williams says young children do not necessarily need to be able to see their teacher¿s face. WRONG! The face is the "organ of emotion," we constantly read facial expressions to understand what others are feeling. The face contains other clues. Our identity is captured in our features. The face is one of our most important possessions, 'the organ of emotion.¿ The face provides clues to our own feelings and those of the people around us. Our faces are a dynamic canvas. The face is the most powerful "channel" of nonverbal communication. We "encode" messages in our own facial expressions, and we simultaneously "decode" the faces of the people around us. In even the most simple interaction, our attention naturally gravitates to the face We constantly monitor the face as it provides vital clues to a variety of possibilities: attraction, whether a person likes or dislikes us, the complexity of emotions, identity, age, humour, and a person's regional and even national background.

These people disgust me they given not thought to the children brought up in an un-natural way by people with abnormal sexual habits. Children need a MUM & DAD in the early years they very much need their Mums. All you hear from these people who believe in same sex couples having children say it all about loving a child. Well it is lot more then that Love is just one part of bringing up children and to think that two men with No child care experience can do the Job. If they were doing Childcare is a job they would have to pass exams and have a CRB Check. I hope Social services get involved in this case
Richard Littlejohn had it right when he said “Now it’s born-to-order test-tube twiplets with two gay fathers and three this-womb’s-for-hire mothers.”

RICHARD LITTLEJOHN: Twiplets? Two dads and a twio of mums - This is about what's good for the adults, not for the children
Read more: http://www.dailymail.co.uk/debate/article-2829400/RICHARD-LITTLEJOHN-Twiplets-Two-dads-twio-mums.html#ixzz3IkjdB8k3
Follow us: @MailOnline on Twitter | DailyMail on Facebook

Posted by Unknown at 2:23 pm No comments: