I recently tried to advertise my Flats to let in one of the local Kent newspapers and was refused because they considered the piece illegal under Discriminatory laws. The section that offend them was “Suit Mature British Subject” when I contacted them to complain I asked what discriminatory about the ad was the word Mature or was it British Subject? Yes you have guessed right it was British Subject. I tried to explain to this female that I had intentionally used the word SUIT so it would not be considered inflammatory in any way, I then went on say if this was discriminatory then using the word MATURE would discriminate against the IMMATURE, or what about adverts that state NO SMOKERS this discriminates against SMOKERS or no PETS does this discriminate against PET LOVERS or NO DSS I can go on. It seems the latter are OK it that horrible word BRITISH SUBJECT a word that you used said with pride but now is considered something to be ashamed of, well according to this paper.
At the end of the conversation she admitted that the owner had directed her not accept the add as may lead to complaints, so our crusading press are now worried about complaints Good job the daily Telegraph had some balls. I have been on the Internet and checked up about Discrimination Laws and can confirm that there is nothing which can refer to my ad. If the owner had said I do not want the Ad rather the hide behind some fictitious law nothing more can be said

So why all the trouble well in all honesty I only want British Passport Holders no matter what colour or religion because at the front of the building I have a Martial Arts Club where children train so if required I need to get a Criminal Records check on my Tenants, a full CRB check can only be done on British Subjects all others you only check on when they entered the country. It is a well known fact that paedophiles, murders and rapists have been allowed in without any checks. I feel I have a duty of care to the children. Also by law I am expected to give a written contract if the tenant can not read English how can he read it? Finally I am not interested in transient tenants who have no references and are living of the backs of the state. I have on occasions rented to non British Subjects but these have always been people I have got to know through my international martial arts Connections.
Dear Blog reader I have sent a copy of this to the various local and Kent newspaper but do not hold your breath for it to be printed, Freedom of Speech in the UK only exists on the Blogosphere


Martin Clarke Sittingbourne
Posted by Unknown at 10:40 am No comments:

Summer is here time to enjoy the evenings sitting in your garden after a hard days work enjoying a cold drink NO! As you sit down some moron lights a fire with smoke not only driving you in doors but making you shut doors and windows, I hope you read this in Gaze Hill, then comes the Party goers who think it is a good idea to light a massive bonfire at 4 in the morning and have loud music accompanied by shouting hope you read this in East Street.

In the present economic climate you would have thought our local council would do there best to support local business? Not so it seems The Barnyard at Upchurch has installed a Marquee for weddings etc and improved their alfresco eating area, which has been done in a very professional way. It seems they have done this without planning permission and of course ignoring planning regulation is nearly as bad as being a terrorists in this country, so the full might of the Council is being used to destroy this so called blot on the landscape but this will lead to many local people losing their jobs and maybe even the business folding and what of the barn well that can go into disrepair, the fields over grown but that will natural part of the landscape! I do not have the full story only what I read in the paper and of course we need planning laws and maybe the owners of Barnyard should be chastised but surely a compromise could be reached here is a suggestion.
Give planning on the decking and car park that effects no one and cannot be seen from any distance, it does not create any extra noise, this will encourage the Barnyard to make business remember it not only a business but a tourist attraction so benefits Swale as a whole. The owners say they erected this Tent to test the market to see if it worth spending Hundreds of Thousands of pounds on another Barn, well if that is the case why do not the Council say you can leave the Tent up for a further two years to test the water as such then it will come down, the owners can not complain because they have admitted it is not a permanent fixture, the Council have flexed there muscles and appeased the NIMBY’s everyone is happy. The recent disgraceful behaviour of some MP’s plus the KCC Iceland bank debacle should make all politicians and civil servants realise that the public have had enough of being treated a some misguided child who does not understand, remember the old Lefty saying “Power to the People” well hopefully David Cameron will make that come true

Martin Clarke Sittingbourne
Posted by Unknown at 9:00 am No comments:

I was on holiday and missed the excitement of the elections I did vote by post. AS a Tory I wanted us to win and I am pleased to that Dan Hannan was once again returned as a MEP, mind you why I bothered voting in the Euro elections is beyond me, as our own MP’s come under scrutiny for fiddling the EU do not have to balance their books and MEP’s like the Kinnocks become Multi Millionaires but my main reason for is writing is for KCC dominated council not to be cocky with their majority because it was not because of the job they have done with KCC in the past it was because people were sick to death of Labour. It has been many years since I considered voting for an other party but because the last Conservative KCC has wasted an exorbitant amount of money on their Web TV project, plus the Iceland fiasco and their promotion no I will go further their proper gander on promoting Homosexuality in schools. I am sick to death of being told that Homosexuals are superior to the rest of us cannot something’s be kept to the bedroom. As luck had it our sitting KCC Councillors were labour and quite a good duo by all accounts, so I could vote for Messer’s Willacombe and Whiting both who I know are good local councillors both new brooms to help sweep clean the old KCC hopefully all the other new Tory Councillors will help in this task
Posted by Unknown at 6:19 pm No comments: 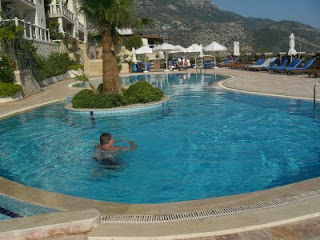 This was our second trip to Turkey the last was about 16 years ago when I had to attend an IBF Conference, it was in Istanbul which I did not like one bit. So with some trepidation we decided on a holiday on the Mediterranean coast of Turkey. Why? One I wanted some sun with blue seas at a reasonable price, holidaying in the Euro Zone was not just expensive but not value for money, all the decent areas had become havens for drunken Brits of all ages with tacky shops etc just look at the comedy programme Benidorm and you will get the idea. So I searched the internet for an apartment, I did not want a Hotel and certainly did not want All Inclusive. I have only had one experience with All Inclusive and that was when Valerie paid for a week in Forte Ventura for our 25th wedding anniversary, we had the same food every day, the drinks were local brew and tasteless, the cliental were mainly unemployed people from Nottingham Council estates, entertainment was mediocre at best with no dress code for the evening, people would turn up straight from the beach stinking of sweat, beer and sand. Highlight of the evening was to get your Bra, knickers or false teeth to the compare, can you imagine that after a whole day of use!!!! Of course Valerie picked a time when the kids should be at school, what a joke we were run live with them and when questioned the answer was “It’s cheaper during School time”

Some say I am snob well so be it I holiday for my benefit not others, any way back to Turkey. After looking through the internet we decided to book a two bedroom apartment with a communal swimming pool, which we found clean spacious, air con and with good views, the swimming pool was not over crowded downside was the mosquito’s at night you will need plenty jungle cream, one invasion of ants and having to climb 77 steps but the pluses out weighed the minus. Kalkan itself was quite a nice small town with plenty of restaurants, small shops etc mind you like most tourists places you had to put up with touting from nearly everyone with the well oiled saying “Hello you remember me I remember you come and eat” Restaurants were clean, toilets very clean, waiters were very friendly have not made up my mind whether this is genuine or just a sales pitch. The food itself was OK but nothing special an the prices only a little cheaper then the UK for example 2 starters, 2 main meals consisting of grilled meat rice and salad plus 4 beers £45 some bars were offering small beer for 75p. A trip on a boat is a must, diving of a boat in the Med is great fun, but it is not for kids it lasts about 7 hours and you have a free meal which was home made and the best meal I had in Turkey but beware do not think the drinks are free you were continually asked if you would like a drink in a really nonchalant way, when you dock you are presented with the bill £30 in my case. It always the case the last couple of days of your holiday you find a nice little restaurant on your door step which was cheap and a good standard of food and drink, this was the case with Café Vita Kalamar Yolu. Two starters, two main courses, two Vodka Lemonade, two very large glasses red wine £27. There were lots of man made beaches and beach clubs and a beautiful beach where turtles come up at night, everywhere the water is crystal clear and warm.

I rather interesting custom has developed amongst Brits of a certain age is to dress in white on the last day to show of the tan, they only needed them to wear hoods and you would think the Klu Klux Klan has arrived, mind you I suppose I am jealous because it is asking for an accident if I wear light trousers

This was one of the best Holidays in the Sun I have had and came up to my expectations, I can recommend Kalkan Turkey to anyone in fact I have booked a 14 people villa for next year to celebrate my 60th and my 40th wedding anniversary ideal for a family holiday.
Posted by Unknown at 5:42 pm No comments: