'The Great Brain Robbery': The Left have hijacked education
MITCHELL GOLDIE·MONDAY, 29 FEBRUARY 2016
It’s no secret to anyone who has experience of full-time education, that many of our educational establishments have been conquered by the left. In fact, the Marxist left have managed to infest every level of education from primary school right through to University. Nevertheless, it was not until the recent general election that I saw the full force of this political corruption in our educational institutions. It was not until the election that the dangers of the Left wing of politics, became clear. As an A-Level student, I experienced it first hand.
Devoted trade unionists crept out from the shadows and into the classrooms, pushing EU propaganda masquerading as ‘educational books’, which contain fabricated and deceptive versions of the history and current situation concerning the “EU project”, honouring their allegiance to their much loved, europhile Labour Party.
From senior members of management, teaching staff and those who could infiltrate the education system, I experienced the full reality of the frog-marching Labour party ground troops. Political bias was extensive – I suspect the Tory’s scaremongering about the SNP had kick-started the Labour party’s main asset; the trade unions. This led to a wave of misinformation about the other political parties’ surfacing. The Labour party certainly didn’t shy away from the usual techniques of using misleading figures, and the usual lectures of their ‘proud’ history; all of this vomiting from the state-obsessed, narrow-minded teaching staffs mouths, projecting into the minds of the students. The sad result of this is that an educational establishment, which is expected to provide a balanced and accurate account of politics, becomes the preaching machine of the Left.
Not a surprise really though; the most recent government-commissioned research found that 97% of teachers in England belonged to a union. The unions’ funding to the Labour Party amounted to £5,000,000 in the last quarter, so it’s no wonder our educational system has vastly shifted to the left.
Educational institutions have staff who dedicate their life to ensuring that the next generation are educated and well informed about the world around them. Naturally, it is in our schools that many young people first encounter discussion and develop not only their critical skills, but their own personal views and identities too. Young people discover themselves in school, and with that comes the discovery of their own ideas, thoughts and opinions. This can only be achieved properly, with a good formation; essentially coming not from being taught ‘what’ to think but rather, ‘how’ to think. More specifically, how to think critically and freely. The developmental stages in education undoubtedly represent an important time in the development of each student. It is an even more important time at the moment politically for the development of the United Kingdom, with the upcoming referendum on our membership of the European Union.
Educational institutions have been charged with the honourable purpose of forming the young people of Britain. There is a certain duty on our schools to ensure that students are well informed and rounded. Furthermore, it is important that students are able to learn to think for themselves, or as mentioned earlier; to learn ‘how to think’ rather than ‘what to think’. As individuals, students should be able to express their own political views without facing a barbaric verbal attack from the frothing mouths of the modern socialists, just because their opinions differ. Maybe that is the reason for the rather disappointing 58% turnout among 18 to 24-year-olds in the recent general election.
We all recognize that whatever our political leanings, the importance of being well informed. It is a vital tool for engaging in the everyday running of the country as a citizen; it is even more important that we pass this liberty onto our young people, and help them to form their own views. This can only be achieved through a real politically balanced education system. Why have the left grasped onto the education system so tightly? Because with education, comes liberty, and with liberty comes power, something the left not only seek to deprive our young people of, but also seek to manipulate to their own advantage. It is far better for them if you do not think; it is far better if you just ‘do’.
We must take back our education system, take back our future and take back our liberty.
Mitchell Goldie
https://www.facebook.com/goldiemitc...
Posted by IBFBCSA at 9:20 pm No comments:

Should we give away our Grandchildren's Rights?

I think you all know I want to leave the EU, there will be many reasons why to leave and why to stay. Yet so far the reasons to stay in the EU are only selfish ones for example on Radio 4 Today Programme we had a scientist telling us how bad it would be to leave the EU stating that Science would not advance without the EU, this may or not be true. Yet he was totally selfish he could not see any further then his own selfish demands

There are countless arguments I could put to coming out of the EU but my main concern is the future of my grandchildren. What right has anyone to impose on future generations a system of Government that does not allow self determination which can not be reversed because that is what will happen if we remain in the EU because no matter what Cameron says the EU will become a United States of Europe and Countries will become no more then County Council 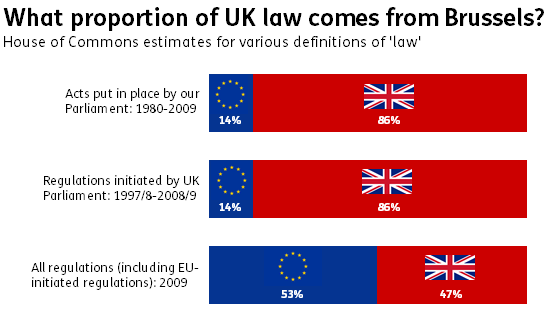 I believe the people of GB should decide their own future through our own Democratically Elected parliament. As the years go by our voting system may Change, as may our Parliament.  Yet this will be done by the people of this country a true Democracy and not from some outside forces.  The EU is nothing more then a Plutocracy, which is why the very rich and famous want us to be part of the EU/USE

Posted by IBFBCSA at 7:37 pm No comments:

Calais France: What Is Really Happening In ‘The Jungle’

Turkey and the EU 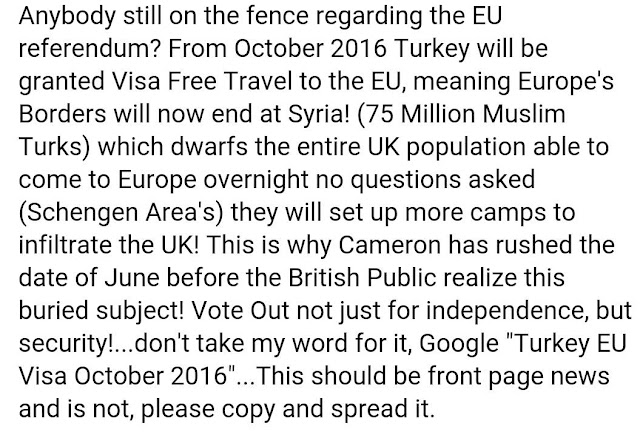 If I were the devil ~ Paul Harvey

Posted by IBFBCSA at 8:52 pm No comments:

If I Were the Devil - (BEST VERSION) by PAUL HARVEY audio restored
Posted by IBFBCSA at 8:52 pm No comments:

And you tell me Obama is not a muslim?

This is disgusting IN YOUR FACE.
One brick at a time!

Thomas Jefferson once wrote: "If a nation expects to be ignorant and free...it expects what never was and never will be."
Carolyn Walker-Diallo was elected to her office in November 2015.
Please tell me this is not right!!!! Where does it say we use the Quran????
First Muslim Woman Judge Carolyn Walker, hand-picked by President Obama sworn in as judge of the 7 Municipal District, Brooklyn by holding the Holy Quran at Brooklyn Boro hall on December 10, 2015, it was a Historic Day!!
Since the Quran forbids all law but Sharia Law, I guess she will head the first Federally sanctioned Sharia Court. Kinda makes you proud, doesn’t it? Gives me chills up my legs said Chris Mathews.
Very little media coverage on this ......
Another chink in the armor, no one cares, until it's too late ! step by step by step....this is how our culture will end.
Obama supporters, your dream is coming true in destroying America.
http://www.snopes.com/muslim-woman-sworn-new-york-city-civil-judge/

Posted by IBFBCSA at 8:28 pm No comments:

Posted by IBFBCSA at 2:36 pm No comments:

The Polls show that the Majority in GB want to stay in the EU. Those that do may classify themselves as EU Patriots but in my mind that makes them GB Traitors. Yet the Polls do not show what I find on Facebook and other Social Media?
One thing is for sure the Pro EU will use lies, propaganda and will get lots of money from the EU to promote their ideology. David Cameron the son of Blair has always wanted us to stay in the EU and he will continue to liar about the benefits. So will the GB Out win my heart wants that to happen BUT my brain tells me NO for the reason I mentioned above. As a Conservative Voter I feel ashamed of that Elite PM and his Elite friends who make up the Government BUT what alternative do you have the Neo Communist Corbyn who leads the Labour Party NO, the LibDem’s who are another Socialist Party NO, UKIP YES but our electoral system will never allow them to gain power so you either vote Conservative or do not vote at all. The Conservative Party needs to clear out all the Public School MP’s who were born with a Silver spoon in their mouths plus those who went straight from University into Politics encourage people from normal backgrounds who have worked hard all their lives to stand as MP’s.

There will be lots of arguments from the Out and from the In here are my main reasons to leave:

Get Britain Out is an independent, cross-party, grassroots Eurosceptic group campaigning to get the United Kingdom Out of the European Union. We want to restore UK Parliamentary democracy and take back control from the unaccountable bureaucrats in Brussels. We want Great Britain to be free of EU interference, and we want to decide who can come into Britain by controlling our borders once again. The Prime Minister’s so-called ‘deal’ in advance of the Referendum is pathetic and we must now fight to Get Britain Out of the European Union as soon as possible.
Why?
1
Bring Back UK Democracy
The unelected European Commission which runs the EU, regularly rejects attempts by Britain to reform the Union.
Since 1996 – when records began – the UK has never managed to block a single piece of EU legislation.
2
EU Membership contributions costs Britain £14.5 billion a year
Added to this, the cost of EU Regulations hinder 95% of UK businesses – the top 100 EU Regulations cost the UK economy a staggering £33.3 billion a year.
Less than 5% of UK businesses trade directly with the EU, but have to adhere to all EU Directives.
As an added incentive following Brexit, Britain would be able to sign its own trade deals with the rest of the world.
3
“Not 1 job is at risk from Brexit”
This was forcibly stated by Lord Digby Jones, the former Director General of the CBI and ex Minister of State for Trade and Investment.
He observed how Britain will secure a free-trade agreement with the EU immediately following Brexit ensuring no disruption to trade. (Sunday Politics, 31st January 2016)

Let in more migrants, demand luvvies: String of millionaire celebrities sign letter urging Cameron to intervene in the refugee crisis at Calais
·       Stars include Benedict Cumberbatch, Idris Elba, Stephen Fry and Jude Law
·       As many as 145 put their name to a letter directed at David Cameron
·       It calls on Prime Minister to wave in hundreds living in the Calais Jungle
·       Other signatories are Gary Lineker plus Steve Coogan and Colin Firth

Once again a very rich elite want to impose left wing ideology on the rest of us. They are very rich and will not be affected by this swarm of illegals, will they be living next to them NO, will they take them in NO, will they be affected by school placing’s NO, will they be affected by Health Care delays NO. Look at some of the signatories like Richard Branson for one he owns his own Island has he offered it to the refugees NO. They are donating money to this Immigrant Rabble yet how much have they donated to British Charities? How much have they done for the homeless in GB? How much have they donated to injured Troops?  Most of these are just actors that is all and many like idiot Cumberbatch and Fry come from money rich privileged backgrounds and Public Schools., what do they know about the ordinary persons needs I honestly feel like boycotting all there films and programs.