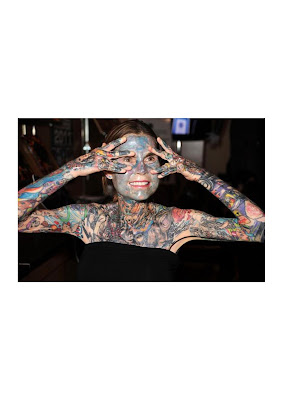 The Obsession with Tattoos mystifies me, I am obviously total out of touch with modern culture but why do people want mark their body most probably for life just because it is a fashion statement of today? Years ago tattoos were for Gypsies, sailors and the working class not now it seems 90% of the UK have them. 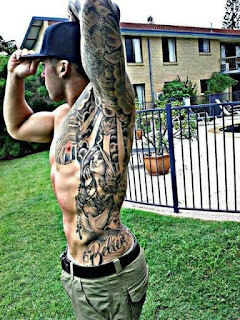 I can understand that sailors used to have them because they thought it protected them from the sea, I understand that groups of people like members of the armed forces would have a Tattoo of their regiment or a particular incident that they were involved in, it was a sign of life long camaraderie some other groups are the same. These in most cases were not as a rule visible when dressed in fact 30 years ago if you had a Tattoo showing it could impede your chance of a Job in fact people with a visible tattoo were only considered fit for manual work. This was totally unfair but fact

Yet now a days we have gone from the indiscreet tattoo to people looking like Maori Warriors with their whole body including the neck and face covered in this so called Body Art.

A 35 year old women on Facebook recently asked where there was a good tattooist as she wanted the names of children stained on her body. I said do not do it because it will be with you for life, the amount of abuse I got from everyone was unbelievable because I suggested it may be something she will regret in later life.

I am 65 and have many friends who had tattoos in their teens and now regret it, so I would advise all those thinking of having a tattoo think very hard because once committed it could be with you for life well after the fad has finished, mind you my own children took no notice of me so why should anyone else.

A final couple of points the price of some of theses tattoos are astronomically priced so having many tattoos is a bit of a status symbol, the more you have the richer you are. I said that they could be with you for life but my daughter has just done a course on Tattoo removal, which I expect will be expensive. So maybe in the future anyone without Tattoos could become status symbols, as people will say “He has money because he has all Tattoos removed”
For those that do not know me, my wife and yours truly we will be the abnormal ones on the beach with no tats
Posted by IBFBCSA at 12:04 pm No comments:

I have always been a great reader of books and when I was younger I read all the Sherlock Holmes, Just William, Jennings, Miss Marple, Poirot and many others. Yet I never read Agatha Christie’s “Partners in Crime” so when it was on TV I looked forward to it.

What a disappointment that was, the plot was weak and unlike most of her works there would always be a twist. Not this one practically from the first episode you had guessed who the culprits were. As for the TV production it was a disaster with the acting being extremely wooden as for casting David Walliams in the title role was a disaster he definitely is not a serious actor mind you not much of a comedian either. The whole thing was more like a 1950’s TV play, no wonder they showed in the Summer when people are not watching TV. In the afternoon I watched a “Marple” episode, which was tremendous, could not believe that the same author wrote “Partners in Crime”
Posted by IBFBCSA at 11:11 am No comments:

Illegal Swarm will come to the UK

Have you noticed how news is changing over the immigration issue how the those in favour of opening up the doors to all immigrants are gaining most of the news and positions on the news and Talk Shows. Today Labour’s potential leader Andy Burnham has said we should open the door to all immigrants the head of the International Body “Children in Need” has tried the old Moral Blackmail about how many children who are in need and by themselves. Of course we in the west are to blame for their predicament, he never once condemned their parents, family or community for deserting them.

No matter what the 70% of the UK population think (that we are full in the UK ) the Left-wing Church of England and the bleeding Hearts brigade will eventually win and the Floodgates will be open to this Swarm of illegal immigrants will be in the UK.

When this happens we will have a divided Country, the immigrants will head for the Cities pushing the indigenous Brits into the Country and smaller towns. This will be like apartheid, as Muslims will dominate the Cities and have sharia law (ignoring UK laws)

Housing these people will be a problem for this illegal swarm, well here is an idea let turn all C of E Buildings into flats as most Christians no longer follow this Left Wing organisation and all those mega rich football players, TV Stars, Pop Stars, Celebrities  should be by law to house as many immigrants as their mansions can house.

Also have the UN not thought of buying a Island build House Hospitals and schools put all immigrants on that Island where they can apply for refugees status to what ever country they choose.

This massive immigration problem from the Middle East and Africa so why aren’t countries like Saudi Arabia, Egypt, South Africa not taking on this swarm of immigrants?

There is only one way to stop this is to leave theEU
Posted by IBFBCSA at 6:15 pm No comments:


Remember this poem when you next meet an older person who you might brush aside without looking at the young soul within .. we will all, one day, be there, too!

Corbyn will be good for UKIP

I think Jeremy Corbyn will be a disaster for the Country if elected but as a Conservative voter do I want Conservative Government without a proper opposition NO. I have to admit I like some of his ideas, Maximum Pay levels for those greedy Bankers, Celebs, Charity executive etc. appeals to me but that will not please some of those Left wing luvvies. I always thought it wrong that we have people living on the street n this country and we have the Richard Branson’s of this World owning an Island, we have a group of kids called One Direction with millions for just playing music yet a Farm Worker gets a pittance compared to them. Who contributes more to the Country?  Am I sounding like Socialist yes BUT as I am a pragmatist and I know the World doesn’t operate on the Christian ethos of every one being equal, no matter what type of political philosophy you believe in.

So I like many others have to evaluate what we have and we know that Socialism/Communism doesn’t work the last 50 years have proved that so the other alternative is Capitalism that is far from perfect and in many cases, not all, proves that greed can and will overrule any Human Compassion. Yet out of the two the latter is the one most of approve of and Human nature being what it is will be one we are stuck with

So back to Jeremy Corbyn if he wins and becomes Labours Leader the Conservatives can only benefit but also UKIP will also benefit. Most die hard Labour voters will never vote Conservative; most think the LibDem as wishy-washy party when given the chance to govern made a complete mess of it. Yet UKIP is seen as a party for the ordinary person in the street and if they can’t vote for a backward communist style Labour party then UKIP is the next best thing

Another thing Jeremy has got it right is the people who have become MP’s, they are professional Politicians across all parties people who have little or no experience of the life of an ordinary person, we have the ridiculous situation in Scotland where we a 20 year old girl who is an MP. Yet back in the 1960/70’s an MP was a totally different beast. Most Labour MP’s would have had experience of working maybe as a shop steward or working on the shop floor they would enter Parliament in later life after gathering considerable amount of experience of the working man on the Conservative side there would be Business men and women who gained experience operating business and employing people, as any good business will tell you needed to understand the needs of your workforce to create a successful business

The MP of today is more likely to be a political graduate mid twenties maybe attended a private school, whose first job would be working within the Westminster bubble. Todays MP is a Political Elite who are detached from the public. I am lucky in that we in our constituency we have an MP in Gordon Henderson who is in 50’s and spent most of life working and in local politics.

Never been in favour of Proportional Representation but after seeing UKIP get more votes then the SNP and only gaining one MP while the Lefty SNP getting over 50 MP’s with less votes then UKIP, this tells me that First past the post is not such a good idea
Posted by IBFBCSA at 11:08 am No comments:

New A to Z Alphabet


From Austerity to Zionist, our new A-Z: RICHARD LITTLEJOHN imagines a new phonetic alphabet after a Mail reader was told off for using the phrase 'Z for Zulu' by the DWP

Okay - I will play fair as you requested. The problem is not one of race (immigrants) nor politics (border controls), rather it is the economic incentive to come to this country. If we abolish the welfare state (particularly thinking about unemployment benefit for those who haven't paid into the social insurance scheme) then only the hard working people of the world will want to come here. We might even export some of our own white dole scroungers while we're at it
Posted by IBFBCSA at 7:00 pm No comments: