More Problems at Westland’s
I have now put 2 articles on Facebook and on my Blog concerning Bullying at Westland’s School the two articles attracted over 220 comments mainly about students been bullied. Now I have just been told about a dangerous case of bullying. A friend of mine son’s was threatened with a knife and was encourage by a friend of the attacker to knife him or in the words of the boy “Shank Him”
Needless to say he went to see the Headmaster Mr Cox who responded that they never had a knifing in the School and the knife was only a fishing knife. The father retorted a knife is a knife and can still kill, the father went on to ask about the boy who said shank him. The Head said that this boy has psychological problem and he fantasied about violence and would draw pictures of people being stabbed in the eye. He was only a fantasist, yet nothing was done about him. My friend got extremely angry and threatened to contact the Police, the reply was go ahead who cares. He stormed out the Office but sadly did not contact the Police.
Now my information is second hand but my friend is prepared to give his name and the names of the two boys if the school deny this. It time the School took responsibility of the safety of their pupils. Sorry to say the Schools Management never respond to these accusation
When will Ofsted and other authorities start to investigate the Management of Westland’s which has major problems and that has to be due to bad management, the person responsible for that management is Jon Whitcombe CEO Swale Academies Trust, I am in no way connected to Westland’s or the Trust but one has to ask the question is the CEO position in the Trust still tenable?

I have to admit I am getting grumpier as I get older. Moved into my new Static Caravan was great till Sunday morning where it seems someone with a young child has borrowed one of the near by statics. The child wakes up at 7am and starts crying then the family come outside to have their breakfast talking at a high volume, I can put up with that but it is when the baby starts crying and the parents start talking in baby language that was to much Why do people start talking to babies and young children in a strange language i.e. babber, chu chu train, didums, dogey wogy, brekiweki why not use the correct words Baby, Train, You, Dog Breakfast. It is a wonder they ever learn English. Why do parents think it alright for children to run around a Bar or Function like lunatics. “In my day” there I told you I was getting grumpy.

Used my Bus pass for the first time to travel from Seasalter to Oyster Festival Whitstable to meet my Son John and his gang. In both directions the Bus was ½ hour late not impressed. Like Whitstable but the Oyster Festival is packed standing in a pub and drinking from a plastic glass is not my idea of a good time. Yet the only Beer I had was in the Micro Pub the Black Dog and that was a pleasant experience

I have been given a new Insulin for my diabetes which also containers something that makes you feel full so you cut back on your food intake which seems to be working. Problem is if you have just a couple of wines you wake up with a hang over. I cut back on most carbohydrates as they turn to sugar now I will have to cut out wine. What is annoying is that if you deviate slightly my Blood Sugar increases. When I tell people I have diabetes they all seem to think you are about to die but this far from the truth if you keep to the regime it is not a problem in fact you have a much healthy diet because you are no longer eating rubbish f
Posted by IBFBCSA at 9:06 am No comments:

A teacher protects his son against a Gang of Bullies without using violence; he then is suspended for doing his duty as a father. He faces a disciplinary hearing where they use the testament of the bullies to promote their persecution of the Teacher yet do not ask for statements from the victim or other witnesses of the incident. The Deputy Head falsifies evidence. The Teachers leaves the school

Could this happen? If it has could this be justified

Posted by IBFBCSA at 5:13 pm No comments:

You must read OBAMA a Racist 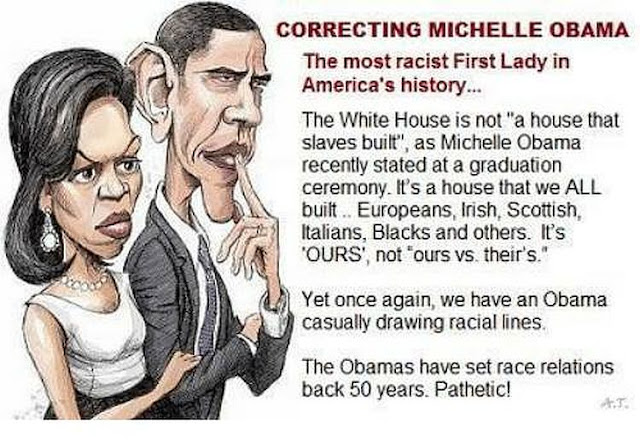 Oh, the White House was built by slaves Michelle? You mean US taxpayers… I know, sometimes it’s hard to tell the difference, it confuses us too.
There’s just one big problem with her statement, which has also been echoed by her husband: it’s not entirely true. But don’t expect the media to tell you why.

The White House was not built solely — or even primarily — by slaves.
Most of the labor force consisted of local White laborers and artisans (from Maryland and Virginia) and a number of immigrants from Ireland, Scotland, and other European nations.
As the project neared completion — the lime-based whitewashing that gives the building its iconic appearance…slaves were indeed added to the mix.
But once again, facts get in the way of the Obama’s preachy race-baiting.
That’s because the U.S. government actually paid the slaves who worked on the White House.
One slave — Philip Reid — was paid directly, a sum of $1.25 per day ($31 per day in 2016 dollars). Is it technically “slave labor” — if you are paid?
Kruta also refutes the offensive comment of Mrs. Obama that The Founders could “never imagine” a black person in The White House, when many specifically wanted to eliminate racial differences:
“The Deleted Passage in The Declaration of Independence” written by Thomas Jefferson is but one example, though later removed to win the signatures of southern colonies:
He has waged cruel war against human nature itself, violating its most sacred rights of life and liberty in the persons of a distant people who never offended him, captivating & carrying them into slavery in another hemisphere or to incur miserable death in their transportation thither. This piratical warfare, the opprobrium of infidel powers, is the warfare of the Christian King of Great Britain. Determined to keep open a market where Men should be bought & sold, he has prostituted his negative for suppressing every legislative attempt to prohibit or restrain this execrable commerce. And that this assemblage of horrors might want no fact of distinguished die, he is now exciting those very people to rise in arms among us, and to purchase that liberty of which he has deprived them, by murdering the people on whom he has obtruded them: thus paying off former crimes committed against the Liberties of one people, with crimes which he urges them to commit against the lives of another.
The infamous three-fifths clause of The Constitution, although often ignorantly condemned as dehumanizing of slaves, was a strategic measure to erode the power of the southern states in The Congress, and ultimately lead to the slaves’ emancipation.
A separate clause in The Constitution sought to eliminate the slave trade to American shores in twenty years’ time.
Once again, the Obama’s never let historical facts get in the way of their race-baiting disses of America.

Posted by IBFBCSA at 4:51 pm No comments:

Some weeks ago I wrote about the bullying at Westland’s School and the response was from over 150 people saying they have had problems with Bullying in fact only this weekend I had a complaint from some one I met at the Homing Park Seasalter who had to move from Sittingbourne to protect her daughter. Well I am pleased to say by contacting my MP, OFSTED, KCC, Leader of the Council, has culminated in the School notifying over the Tannoy the subject of Bullying to all pupils, a team was sent in to investigate bullying and the pupils were given a survey to fill in with regard to bullying. This is good news but it should not have taken an outsider like myself to highlight the problem plus someone should carry the blame for this massive problem, which was obviously disregarded by the hierarchy. The man who should take the blame should be Jon Whitcombe CEO Swale Academies Trust, his position as CEO should be the buck stops here. Yet I expect some sort of statement will come out that the problems has been sorted and no individual is to blame and life goes on.


Hopefully Westland’s have learnt from their mistakes but it is the duty of every parent to be vigilant
Posted by IBFBCSA at 10:09 am No comments:

I have my new Static

We have now moved into our Static Caravan at Homing Park Seasalter. Very pleased with the Park and the Caravan more room then the Touring Caravan. First job was to buy a Memory Foam Mattress and organise Sky TV. The Static is only ½ hour from my home in Sittingbourne so I expect most weekends we will be here, with modern technology i.e. Mobile Phone, Mobile Broadband etc. keeping in touch is very easy and ½ hour from home can be back very soon for any problems. 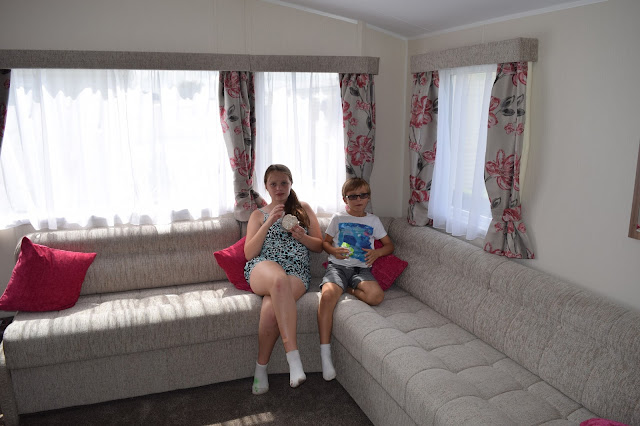 Travelling to the Static I always use the long way a much more enjoyable drive as you can see the changing countryside. You still see the odd old Cherry Orchard with their big trees as a young Agricultural Apprentice one of my jobs was to move the massive ladders for the women pickers. That was in the days when women with their children would work on the Farm to earn what we called Pin Money. You would see lorries coming to pick women up just after they dropped the older kids of at school and they would be returned just before the kids came out of school. Sadly Health and Safety has put paid for that and the fact Farmers need a workforce who can do more then 6 hours a day, so now we have agency workers with agencies who will not employ English to do the picking. Travelling back I got diverted round Conyer and came across a small holding with lots of poultry and they were selling Chicken, Duck, Goose and Quails eggs not cheap £3 for a dozen Duck eggs but they were delicious with large yokes. Interestingly you paid in an honesty box an old fashioned idea but just shows people still have just in fellow human beings 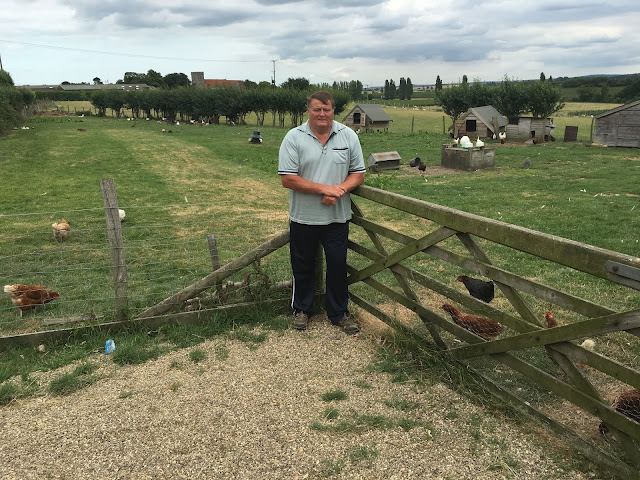 One of the most dramatic changes in landscape was the colours 3 weeks ago corn was still green but now the countryside has changed to a beautiful Golden Yellow. 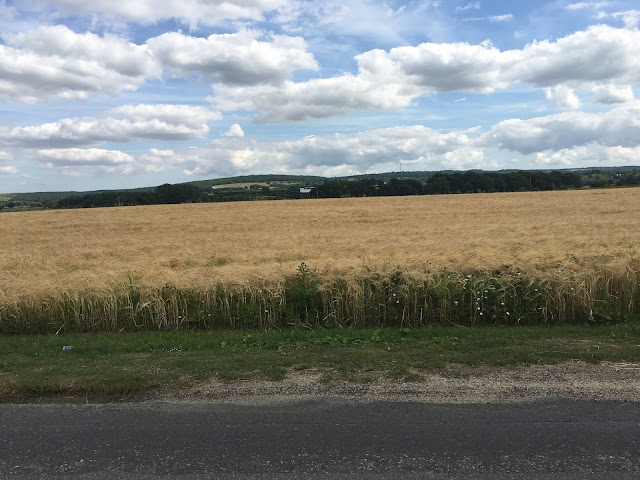 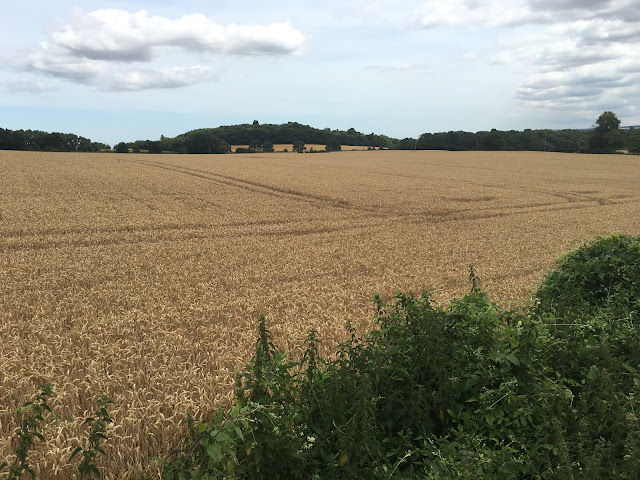 Now lets hope we have nice sunny days and I sell my old Caravan on Monday. There is one disadvantage in that they do not have early morning swims and the pool is somewhat cooler then SeaView
Posted by IBFBCSA at 9:06 am No comments: