Analogue TV etc will be closed down next year, being replaced by the all knowing, all seeing, state of the art DIGITAL. Well sorry DIGITAL isn’t all it is cracked up to be, yes we have hundreds of channels, yet main stream programs are cancelled for sporting events and even worse that Jungle Celebrity thing but what is even more infuriating is the PICTURE FREEZE a common occurrence on Telewest and Freeview and if any of you have purchased a DIGITAL RADIO you will experience unexplained shut down. As a caravanner I travel around the country and in only 70% of the places I visit does digital work yet I can always get an analogue signal, admittedly not always perfect. As per usual with these new bits of technology they rarely live up to their hype, who can remember the first CD which we were told was indestructible and would never scratch
Posted by Unknown at 8:57 am No comments: 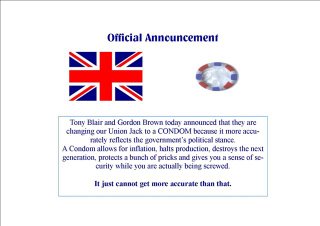 Posted by Unknown at 7:17 pm No comments:

A friend of mine who lives in the Maidstone area has just told me about a problem his sister is having. The lady concerned is in her late 30’s divorced with 2 children, she doesn’t work and her ex husband is disabled so therefore she has to rely on the DSS to supported her and her children, I think you will agree a deserving case. Recently a lady operative from the DSS asked to see her, my friends sister attended a meeting at the DSS and was accused of defrauding the DSS. Then began some aggressive questioning concerning the Sister private life the main thrust being:
Q: Do you have a boyfriend?
A: Yes
Q: How long have you been with him?
A: 2years 3 months
Q: Is he living with you?
A: No he has his own flat
Q: Why are you not living together? After all it has been over 2 years?

The questions carried on in the same vain.

It transpired that someone had anonymously accused her of cohabitating, the DSS lady did not make any investigation she took the complaint at face value, although I agree that we should drive out fraudulent claims but there must be a better and more efficient way then this.

What I would like to know is what right has anyone to pry into your personal life, the sister could be a devout Christian and believed in marriage, to be told by some official that she should set up home outside of marriage is disgraceful, I forgot to mention the fact the Sister was indigenous British one would ask the question if she had been of ethnic origin wearing a vale would she have been treated the same way or what if it had been a homosexual?

The DSS lady has demanded to see both the sister and the boyfriend together at her house to make further checks or I would say infringements on her rights but she is to have a shock because the boyfriend has employed a solicitor to be present. CAN YOU WONDER WHY THE INDIGENOUS POPULATION OF THIS COUNTRY ARE LEAVING?


Martin Clarke
Posted by Unknown at 9:14 am No comments:

So our Council Officials have told us that we are to have two waste bins, one for recyclable and the other for ordinary waste, both being emptied on alternative weeks. This has caused problems in other boroughs where flies, maggots etc have accumulated let us also not forget the smell. My Council Tax increases every year by more then inflation, I realise this is mainly the fault of National Government but I am now about to get an inferior service and one that could cause a health hazard. With the election coming next year I hope all councillors who want a two week service tell us who they are and the voters can give their opinion in the ballot box. Although I have no problem with a Recycle bin I do have the room to store one I pity the people who have to have plastics sacks lying around full of recyclable waste for two weeks plus plastics sacks are not very eco friendly. How will the Council monitor this will they leave it to the bin men to decide whether I have deposited the correct waste material in the right bin or will they employer extra staff to monitor the rubbish at extra cost to the Council Tax Payer who will most probably be given a car to use and help pollute the atmosphere? I expect they will introduce a Bye Law to enforce the council tax payer to fill the bins correctly, then we will have people taken to court for putting the wrong waste in the wrong bin, they will then have a criminal record, what if they have a fine unpaid will they be put in prison which are over crowded? Mind you we could let a few more murders go to make room for the Eco criminal.
NO the whole idea is a disgrace I want my waste collected once a week that what I pay my Council Tax for. I have a much better idea instead of using the STICK why not use the CARROT i.e. give the council tax payer the freedom to choose whether they want be eco friendly by offering them rewards for instance if you have recyclable bin we will deduct £100 a year of your Council Tax and after a while most people would take up the offer and can you imagine the dirty looks you would get if you did not have a recyclable bin. This would not alienate the Council from the community and would work more efficiently and most probably be cost saving as most things that are done voluntarily are done better and cheaper. Yes you will still get the odd individual who will not conform but that is going to happen away. One last thing if I put out my bin ready for collection and someone come along a puts the wrong rubbish in will I be responsible? Will the Eco Gestapo have to prove in court that I produced the rubbish? Or will we all have padlocks to the bins lids? If so who opens them?

IS IT TIME FOR REVOLUTION

For those of you who read my letters you will know how much I dislike the European Union, I believe it is a Dictatorship by the simple fact that power is in the hands of unelected officials.
Please take the time to read some articles below. In the 60's it was the lefties who coined the phrase "COME THE REVOLUTION" well maybe that time has come if we are to value our freedom.


Set out in the latest Bruges Group research by Gerard Batten MEP the full costs to Britain have now been calculated.The facts:
Britain has given nearly £200 Billion to the EU since we joined
In 2007 UK taxpayers will be forced to pay £14.2 Billion to the EU
The EU costs every man, woman and child £873 per year
The EU is costing the British economy £50.6 Billion this year, by 2007 this will rise to £52.4 Billion
That means that by 2007 the cost will rise to nearly £100,000 per minute

An occasional Euro-briefing from Daniel Hannan
Why no riots? Why no mob of aggrieved taxpayers, descending on the European Commission with burning brands? On Tuesday, for the twelfth year in a row, the European Court of Auditors refused to approve the EU budget. Yet the story has pretty much passed Europe’s media by. If a national government agency could not account for the majority of its spending, it would be front page news. But, faced with the usual Brussels tales of bogus invoices and non-existent farm products and collusion between the authorities and the fraudsters, we shrug our shoulders indifferently.
In our collective reaction, I think one can descry the beginning of the end of Britain’s relationship with the EU. The other day, I happened to read a review of a book about successful relationships. The author’s chief point, if I understood her correctly, was that a marriage can weather a good deal of arguing. Rows between husband and wife suggest that each values the other’s opinion enough to want to change it. It is when bickering gives way to scorn that the marriage is over.
That, it seems to me, is what is happening vis-à-vis the EU. For seven years, I have been writing about Euro-corruption. I have recorded the petty extravagances — MEPs’ expenses, Commissioners’ allowances — and the gargantuan sleaze: the billions of euros that disappear from the CAP, structural funds and foreign aid. At first, these articles used to provoke furious reactions from readers. But, as the years have passed, a resigned, disdainful tone has crept into their responses. People seem to be giving up on the idea that Brussels might ever be reformed. The relationship has reached that fatal stage where anger is giving way to contempt. Sooner rather than later, we shall file for separation.
If you know anyone else who would like to receive these mailings, please send their email address to dhannan@europarl.eu.int If you no longer wish to receive them, please reply using the word "unsubscribe" in your title. For details of meetings at which Daniel Hannan will be speaking please see his website - www.hannan.co.uk - click News, then Forthcoming
Posted by Unknown at 3:06 pm No comments: